Today was Quadruple-Witching Friday, which basically means a lot of options expire today. If a lot of options are expiring, a lot of people start selling off their positions, which results in high volume and a lot of liquidity.

Below are the three major indexes: The QQQ, DIA, and SPY.

QQQ is still the strongest of the three major indexes, but it dropped a little bit today. Something to note is that a well-known trader that I highly respect is bearish for the upcoming two weeks.

However, I am slightly bullish on the QQQ and neutral/slightly bearish on SPY and DIA. If the bears were in control of QQQ, they would have already pushed the price down significantly lower in the last few trading sessions, but as you can see in the three major indexes, the selling pressure is insignificant.

I think the rationale for the bearishness comes from the fact that technology stocks (which represent a large fraction of the QQQ) are starting to drop. The negative sentiment for the DIA comes from the tariffs and a possibility of a trade war. The tariffs are negatively impacting the industrial sector, which represents a large portion of the DIA.

SPY is up a little. The key levels to look at are the 265-268 level support zone and the resistance zone in the 275-278 range. Like I mentioned yesterday, the SPY is running into overhead resistance at the moment, a break of this resistance signals to me that SPY will at least test the 285 all time high levels in the weeks following the resistance breakout. 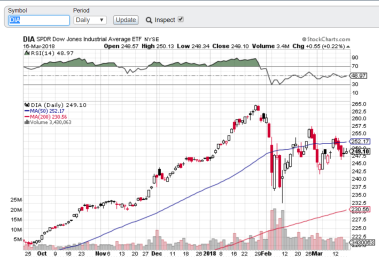 Surprisingly, DIA performed the best of the three indexes today. The chart is still the weakest of the three since it’s hovering in the middle of the support and resistance zones. I expect the index to trade in the 242-255 range for at least a week or two.

I will now briefly look at the FAANG stocks now. 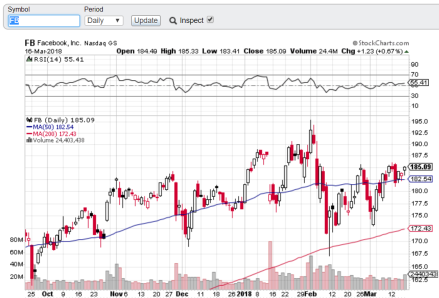 FB had a strong move and ran up to neckline resistance of the W formation. The close was strong since the closing price was the high of the day. This signals to me that FB will likely breakout and retest the all time high levels in the $190s.

If you are a day trader, Monday would be a good day to buy the breakout for a quick scalp.

AAPL didn’t really do much today. One more flush down to the 174-176 level is a good entry for a swing trade. If you are aggressive and are willing to take a worse risk:reward ratio, you can buy on Monday. 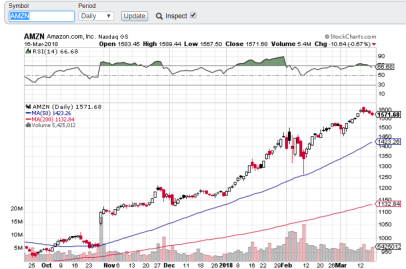 AMZN actually dropped for once! Wow, that’s a first. Like I said yesterday, I wouldn’t take a swing long position until AMZN dropped down to at least $1530. 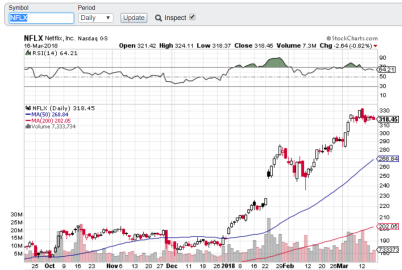 NFLX is consolidating near the all time highs which is bullish since that means the sellers are not pushing prices down yet. I would consider taking a swing long position in the $290-$300 price level.

GOOG actually had a substantial drop today. Another 15-20 points down and I’m a buyer for that juicy swing trade.

Two trades to add to your watchlist are “W” and “OSTK”

A trade that I like making is a big move down, then the stock bounces up, and finally retests the previous bottom again for a W formation.

Below is W. Notice how the stock looks like it wants to retest the 70-75 support range again. This offers a good low risk opportunity. I have marked two levels on the chart where you can sell. One of them is obviously more greedy, but as a trader, you can decide what style of trading fits you the best. What works for one person may not work for another. Find a strategy that works for you, and stick to it.

Honestly, I was quite upset I didn’t buy after the massive flush down off poor earnings in late March. But hey, hindsight is 20/20 and confirmation bias is overpowered!

I will share some other stocks to add to your watchlist tomorrow. I will also be reviewing the indexes on the weekly and monthly timeframes. Have a great day, and thanks for reading! 😀

Hi, I’m Nathan. I graduated from Boston University in May of 2020. I majored in Finance and minored in Piano Performance. I’ve always found the financial markets fascinating so I decided to start this blog to share my experiences. Outside of stock trading/investing, I enjoy teaching and playing piano, fishing, watching anime, and teaching/playing "Go," an ancient Chinese strategic board game. View all posts by bigfry