Did you know that lump sum investing (investing all your money when you get it) is significantly better than dollar cost averaging (investing a fixed amount spread out over time)? Here’s the source from Time magazine.

As you can see, the stock market sold off really hard today. The major indexes did significantly better than the FAANG stocks, with most of them selling off over 3%. The Russell 2000 index (IWM) only dropped .57%, signaling that small cap stocks are still holding up nicely. That is the one reassuring thing about today’s price action.

As I was saying yesterday, I believe that if QQQ broke through 162 and closed below it, I would turn bearish. That is exactly the case. You can see that I’ve switched sides for my targets. However, I am not short, and wouldn’t advise shorting until QQQ retests 162. Your target would be 154 since that is the next support level down.

In conclusion, I still prefer sitting on cash over shorting an up trending market.

I do favor a bounce upwards in the next few days, but I think we are ultimately heading lower to retest the previous lows since QQQ broke through 162.

Above is ticker IWM, which is the ETF that tracks the Russell 2000 Small Cap Index. 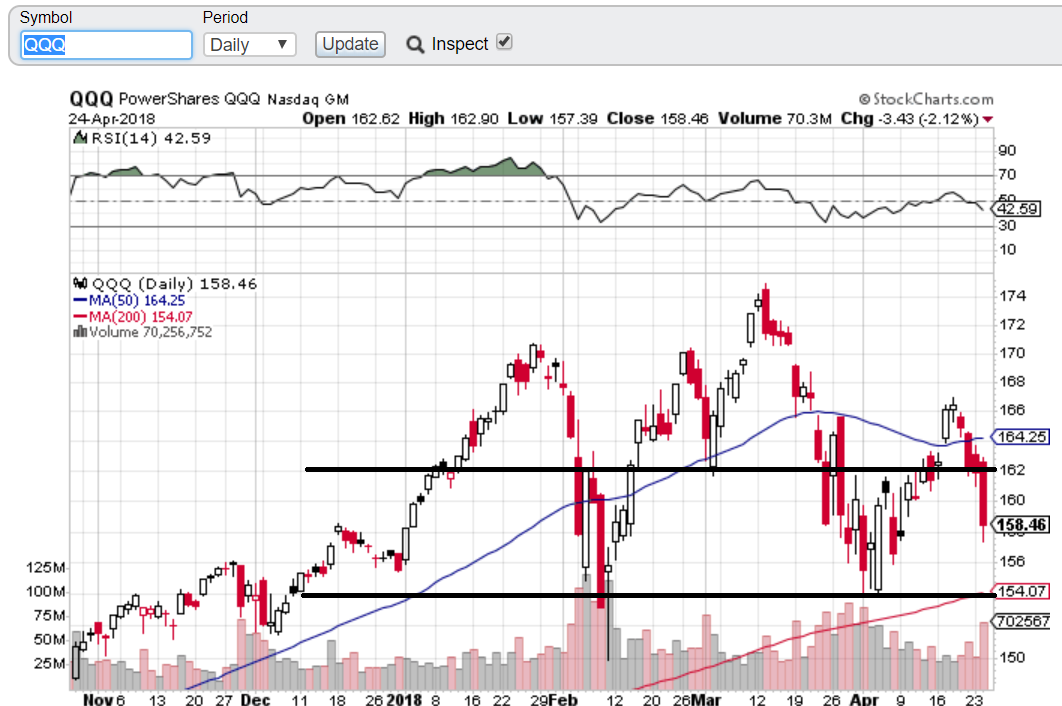 Here’s the QQQ. Since we broke through and closed below 162, I would either sit on cash until QQQ tests 154, or be aggressive and short QQQ if it retests 162 from blow.

I think MU is a screaming buy here because this trade presents an excellent risk:reward ratio. Also, MU has fallen into a support region highlighted by the rectangle above while being in an uptrend. Your stop loss would be placed at or near 44, with a profit target somewhere between the mid 50s to low 60s.

Hi, I’m Nathan. I graduated from Boston University in May of 2020. I majored in Finance and minored in Piano Performance. I’ve always found the financial markets fascinating so I decided to start this blog to share my experiences. Outside of stock trading/investing, I enjoy teaching and playing piano, fishing, watching anime, and teaching/playing "Go," an ancient Chinese strategic board game. View all posts by bigfry