SPY closed the week above the key resistance level of 272.   I’m expecting further upside next week, but I think sellers will get aggressive near the 280 price range. 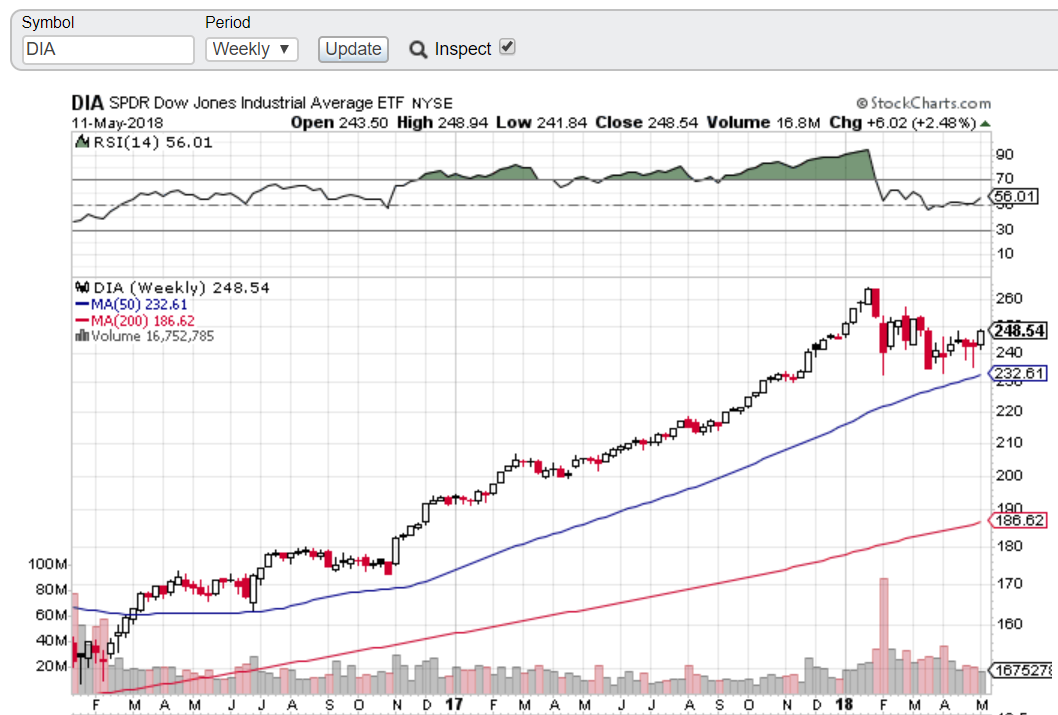 DIA is still struggling to have a solid close above the 248 resistance level.  If there isn’t bad news next week, I think we can retest the resistance zone near 252-254.

QQQ is still the strongest of all the indexes.  QQQ is running into strong overhead resistance in the 170-172 zone.  Looking at just the price action, I think the upward momentum can carry QQQ to 172 next week.

Companies do stock splits to “signal” to shareholders that their company is doing well.  A secondary reason for a stock split is to increase liquidity (more easily converted to cash) by allowing people to purchase shares at lower prices.  Let’s say you had $1,000 and wanted to invest in Amazon, but since the share price is currently near $1,600, you wouldn’t be able to buy any Amazon.  If Amazon did a 10 to 1 stock split, making the share price $160, you would be able to buy 6 shares with your $1,000!

Although yesterday I was quite bearish because the price action was hinting that we would close red today, since we closed green, I maintain my bullish bias from 5/7.  Google hit my “if wrong” target after jumping nearly 3% today.

I’m still skeptical on Apple’s current price action and think it will pullback to 180 soon, but the markets don’t care about what I think. 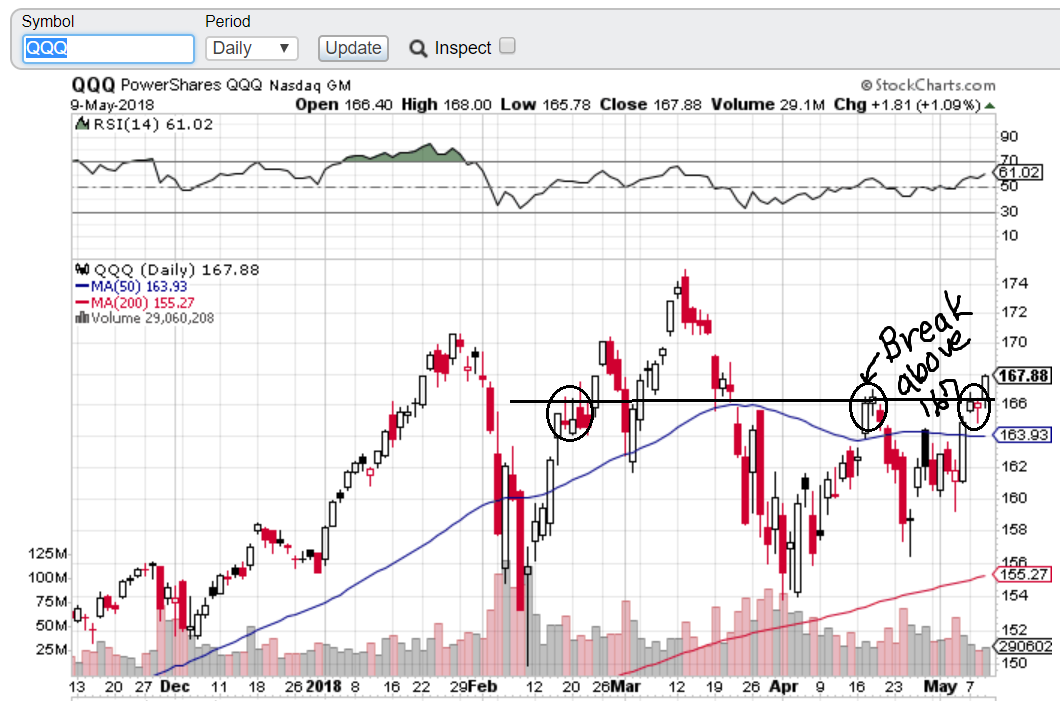 QQQ broke above a key resistance level at 167 today.  This is very bullish, but beware that since everyone looks at the same chart, this could be a classic “bull trap.”  Bull traps occur when bulls get baited into buying right as price reverses sharply lower. 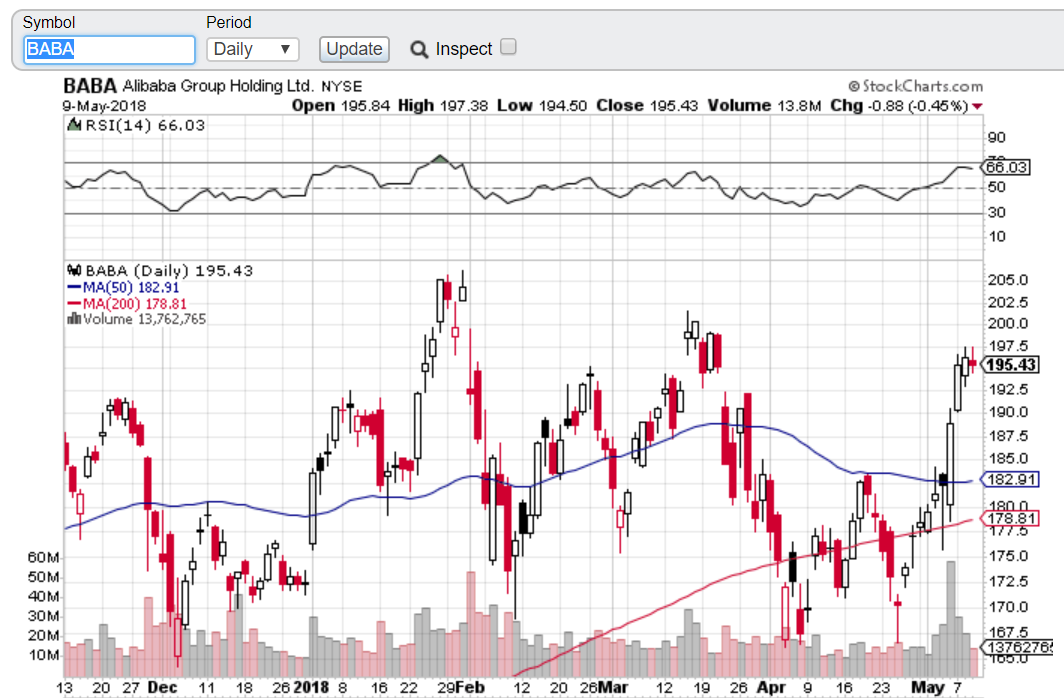 Generally, I’ve found that if BABA drops when the market goes up, this is a sign that BABA will drop further.  We will likely find out if this is true after tomorrow’s close. 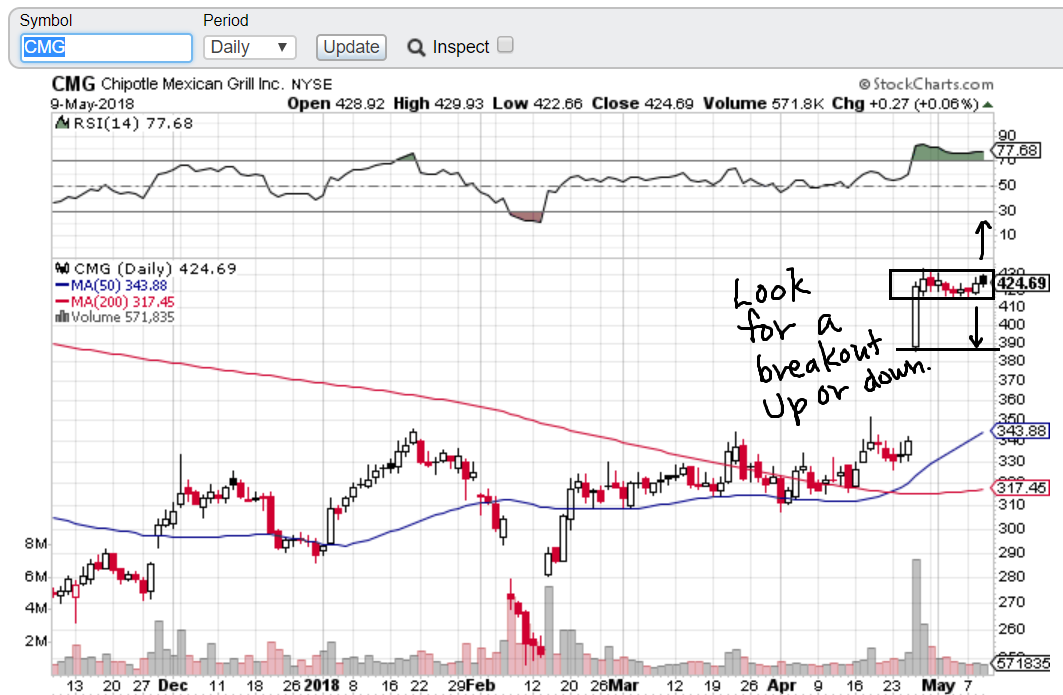 Chipotle (CMG) has been trading in a very tight range in the last 2 weeks.  Look for a breakout in either direction either above or below the rectangle that I’ve highlighted in the chart above.  You can buy CMG on a break above 430, and short it on a break below 415.  Or you can be aggressive and just short it when it hits 430 with a tight stop.  I favor a downward breakout with a target of 390.

When a company buys back its own shares (share buyback), the common misconception is that the EPS will increase.  The EPS is Earnings “Per Share,” or Earnings/Shares, so if the company bought back shares, lowering the denominator, wouldn’t the EPS go up?

Unfortunately, the denominator of EPS is actually the “weighted average number of shares,” meaning the number of shares is averaged over a year.  Thus, buying back shares will not impact the EPS ratio. 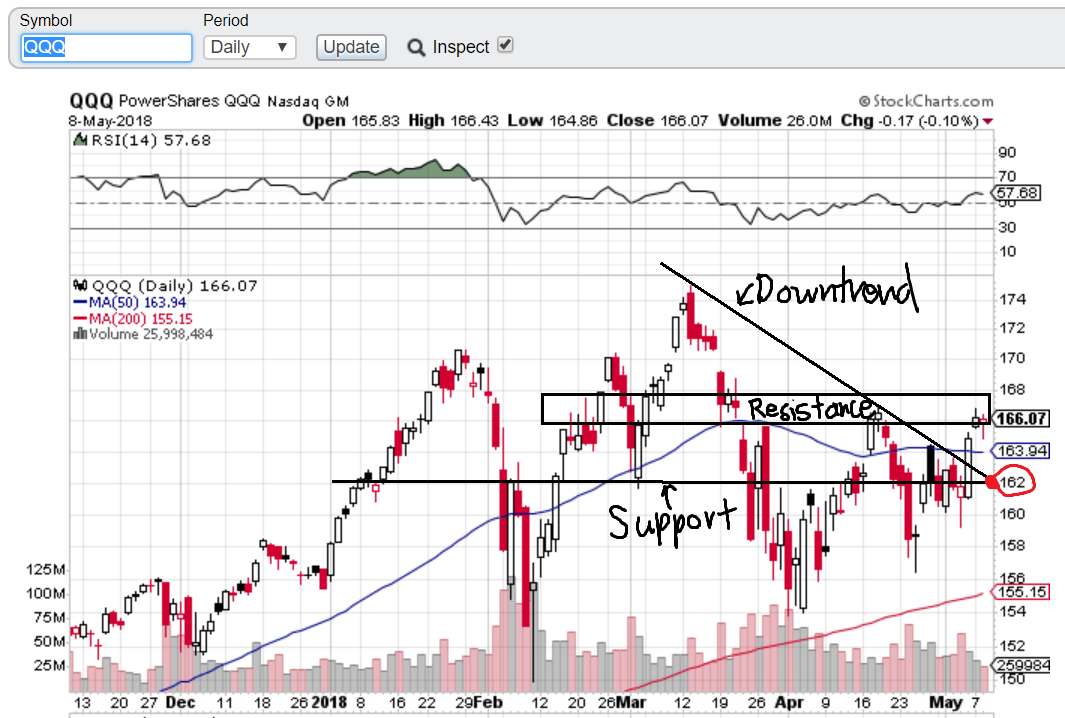 I think that if QQQ doesn’t close green tomorrow, we will probably see a retest of 162 by the end of this week or early next week.  Notice how the downtrend line from the March highs intercept with the 162 support level.  That makes the this level even more important.  If QQQ did drop to 162, that’s a drop of another 4 points.  Since 4 points is only 2.5%, this drop could happen in one day.

The reason why I’m bearish all of a sudden is because I think Apple will see a pullback due to aggressive profit takers.  Also as a side note, I just sold my Apple position today. 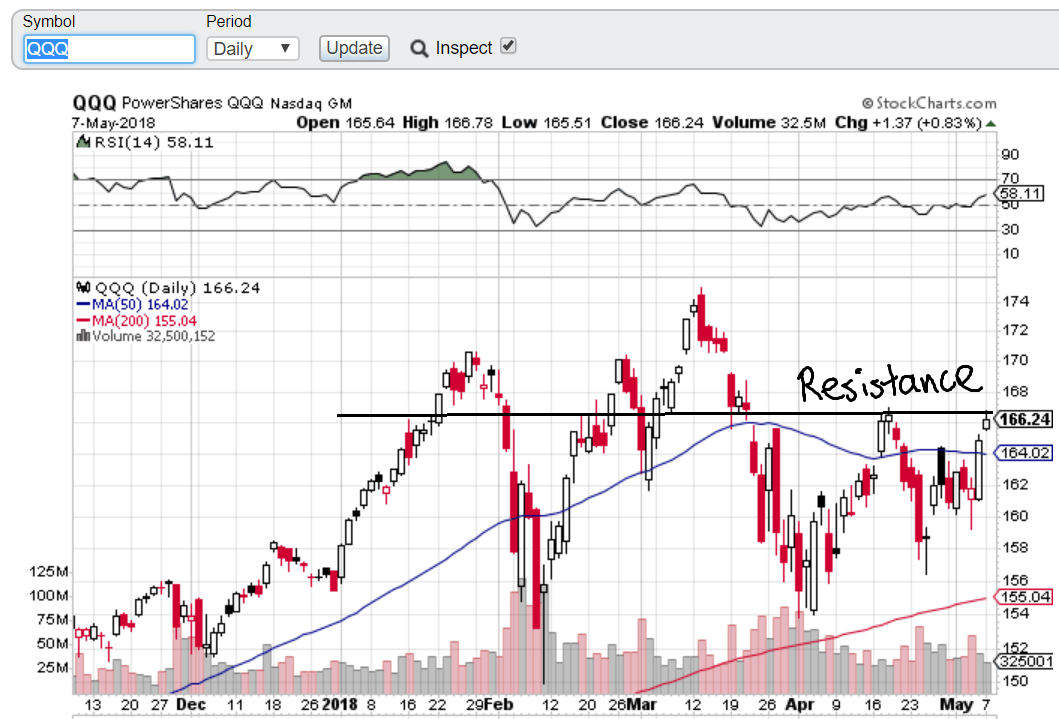 QQQ is running into overhead resistance. We will have to see if QQQ can push through this level tomorrow or if we pullback from here.

Apple is the largest component of QQQ, and it looks like it has found a temporary top.  It looks good to buy in the 177.5-182.5 zone, although I favor the high 170s since it offers a better risk to reward. 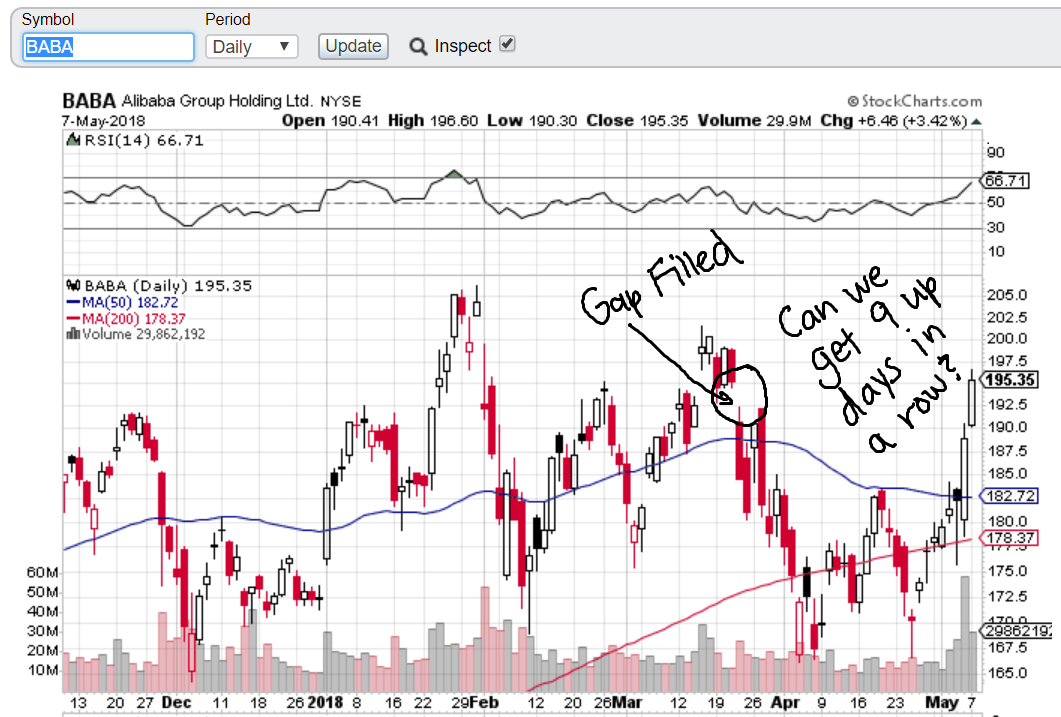 One more push, and BABA will be at 200 again! Unless you think we break out over 205, it’s probably a good idea to take partial or full profits near this price.

The weekly chart of QQQ is above.  I’ve circled the lower tails displaying buying pressure, as well as highlighting a divergent high.  A divergent high means that the index/stock made a higher high, but the RSI indicator made a lower low.  That is bearish.  However, we are still in an uptrend, so it’s generally a better idea to buy on dips instead of short selling high points.

The weekly chart of SPY is currently stuck between the support and resistance area.  That makes the direction unclear, although currently, there’s more evidence supporting a move up.

Look at the weekly chart of BABA above.  I’ve mentioned in multiple posts that BABA was a good buy in the 165-175 zone, and a good sell in the 190-200 zone.  BABA is now approaching the 190 area, which represents a good price to sell at.  However, I believe BABA can hit 200 on this move up before pulling back because BABA had good earnings last Thursday.  Note that a break and close above 205 on the weekly chart would be very bullish. 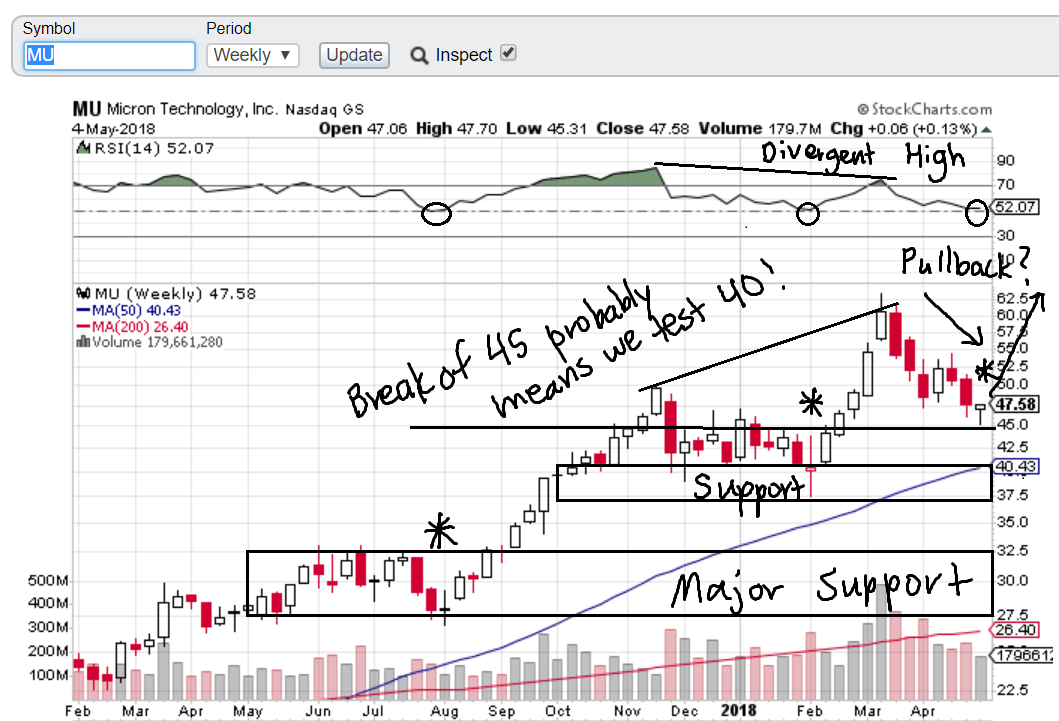 Here’s the weekly chart of MU.  I think MU is a good long term hold and represents a good swing trading opportunity here.  As long as MU holds 45 on the weekly chart, I think we retest the highs near 60.  Do note that we’ve made a divergent high.  Like I described in the QQQ chart near the top of the page, this is bearish.  As you can see in the chart, prices fell from the recent high.

Apple broke out to an all time high (ATH) after selling off hard in the last few months. Although Apple is up 13.25% in just one week, the chart hints that Apple has enough juice for another move up before pulling back.  If we move up, I suspect a test of 190 since it’s a nice round number.

Chipotle (CMG) recently broke out upwards after releasing a very strong earnings report.  Judging from the price action and moving averages, I think CMG will pullback to at least the 380-400 area from a weekly perspective, which is another 5-10% down.  Of course, the upward momentum could easily carry the stock higher too, but my bet is down.

Did you know that France cut Cryptocurrency taxes by 50% a couple days ago?

I’ve updated targets for May 25th, which is 3 weeks from this Friday. As you can see, I’m medium term bearish after today’s price action. Despite Feds not hiking rates, the market still sold off. I am still bullish on Facebook and Apple though, as I think their earnings reports were really strong and will propel them upwards.

I’ve also added an “If wrong” target, meaning if the market decides to rally (against my prediction), I expect the market to reach those targets by May 25th.

My May 25th target for Apple is the top of the trading range, which is at 183. If Apple decides to sell off with the market, I expect it to gap fill back to 169. 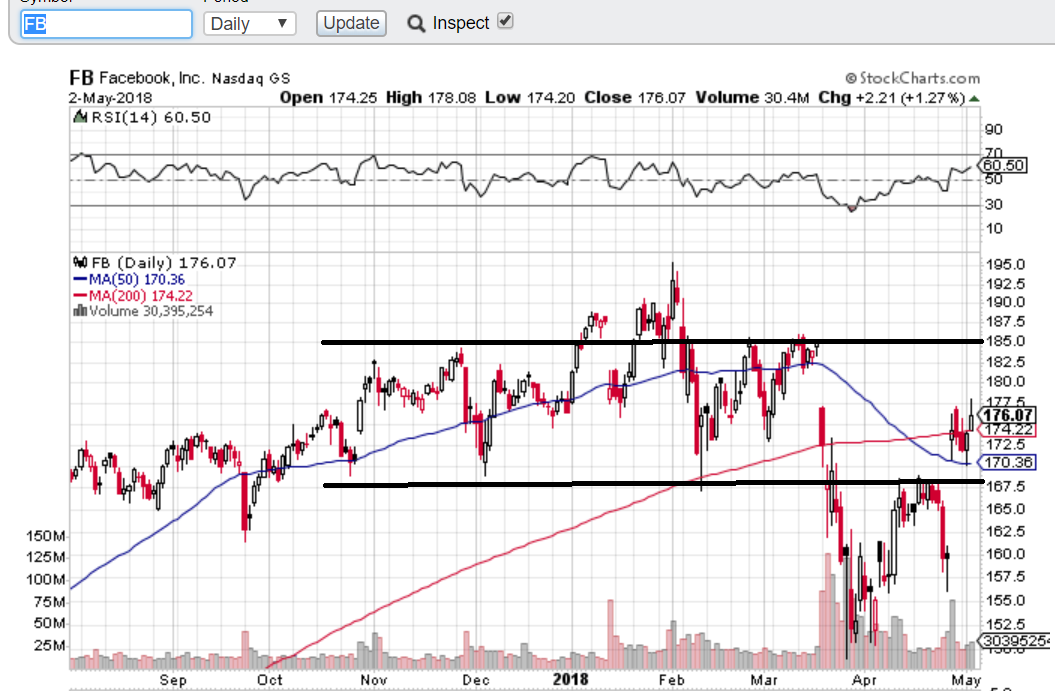 I think Facebook has a good chance of climbing to 185 within the next three weeks, highlighted by the upper horizontal line in the chart above. In case I’m wrong and Facebook sells off, I think it will drop to the previous support/resistance level at 168. 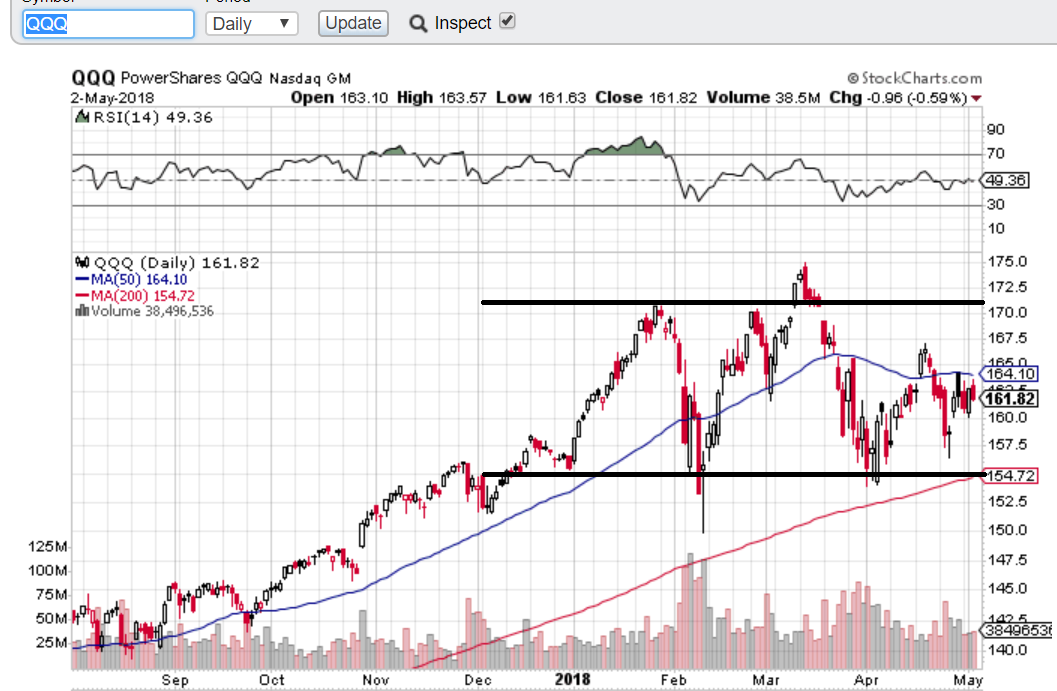 Lastly, let’s look at QQQ. I think there’s a better chance we hit 155 before we gap fill to 171. I do not think the bull market is over, but I think QQQ will retest 155 before moving back to the 170s.

Targets will be updated tomorrow now that Apple has reported earnings 😀 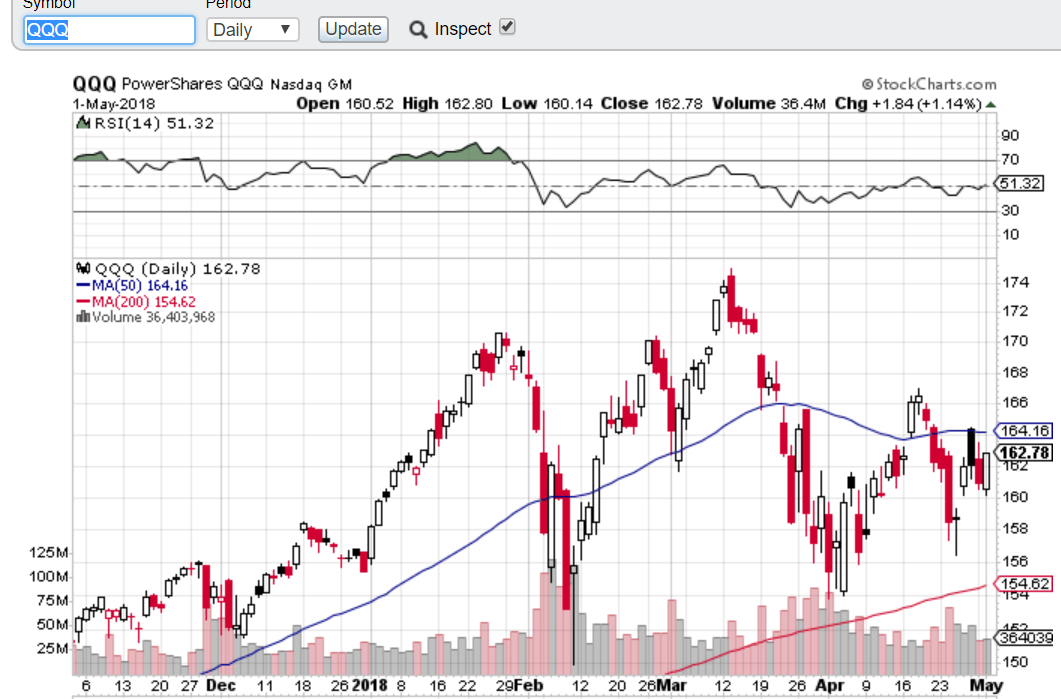 QQQ printed a nice strong candle today due to Apple moving higher. I expect Apple to close below 175 tomorrow simply because it usually moves down after earnings beats.

Remember to check back tomorrow for updated targets! Have a great evening -Nathan

As a continuation from the last fun fact, the Chinese stock market is only open for 4 hours compared to the 6.5 hours that the U.S. is open. I think having a 1-2 hour break for lunch in the U.S. market makes sense. 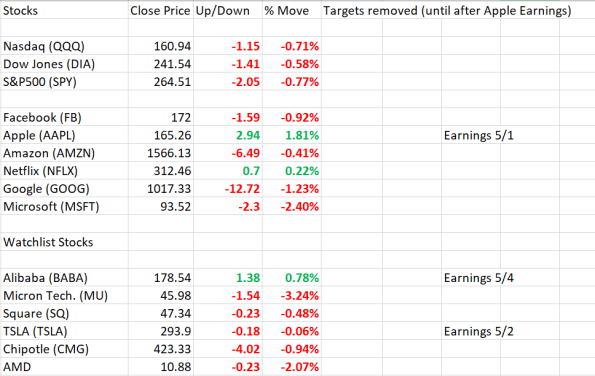 For reference, I will be adding to my MU position for the long term (10+ years hold) as I believe the company is financially stable and highly profitable. The only concern is that the memory market experiences many boom and bust cycles, which could be devastating for the stock.

QQQ sold off a decent amount today, but tomorrow is the day that really matters. Apple will be reporting earnings around 4 PM tomorrow after the market closes. I honestly can’t see it going down after earnings, but that’s just me. I believe that the bad news has setup Apple for very low expectations, so any sort of good news will have the stock price sky rocket 4-5% to 172+. Also, I’m thinking a lot of people already sold before earnings.

Apple broke down through the 165 support level, but has now bounced back and closed right at that level again. This false breakout (assuming it holds), will cause the stock price to spike up as shorts panic cover.

Above is the monthly chart of QQQ.

Unless we close below 150 for any given month, I think the bull market continues. Also, notice that in 2008, the market sold off hard, recovered a bit, but then crashed. So far, I think that if we keep making new highs, there’s little chance that we have a crash like in 2008.

Since Amazon surged after-hours today on a huge earnings beat, why don’t we look at Bezo’s dog? Damn, that is one cute puppers.

I’ve removed my three targets on the major indexes because I realized having them there made no sense until after earnings season is done. I did think we would bounce, but not this hard. My portfolio aint complaining 🙂

Amazon and Intel surged after hours. We will look at their charts after tomorrow’s close. Microsoft also beat earnings, and is up a decent amount after hours (2-3%). Also, Chipotle managed to go up nearly 25% after good earnings yesterday.

Let’s look at the daily chart of Chipotle below. 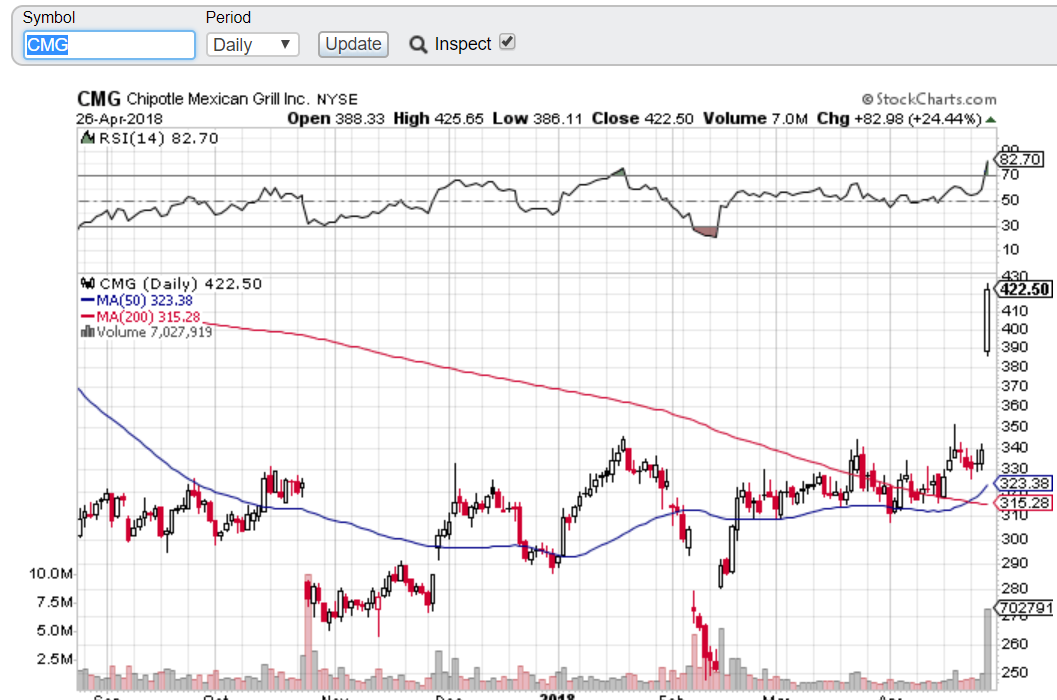 Notice the strength of today’s move. Not only did Chipotle (CMG) gap up, but also moved up another 30 dollars on the day. Additionally, CMG closed near the day’s high, displaying further strength. 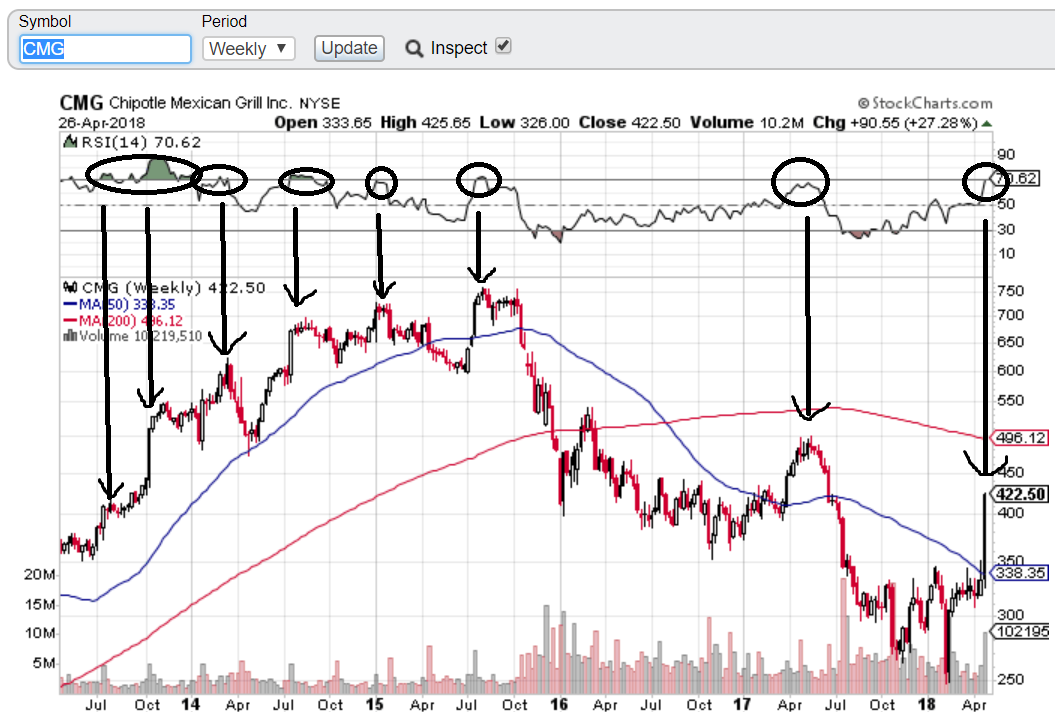 Here’s CMG on the weekly time frame. Although I rarely trade with the RSI (Relative Strength Index), I did observe that when Chipotle reaches or nears the overbought RSI reading on the weekly chart, it tends to drop significantly.

I will add CMG onto the watchlist tomorrow, along with AMD. 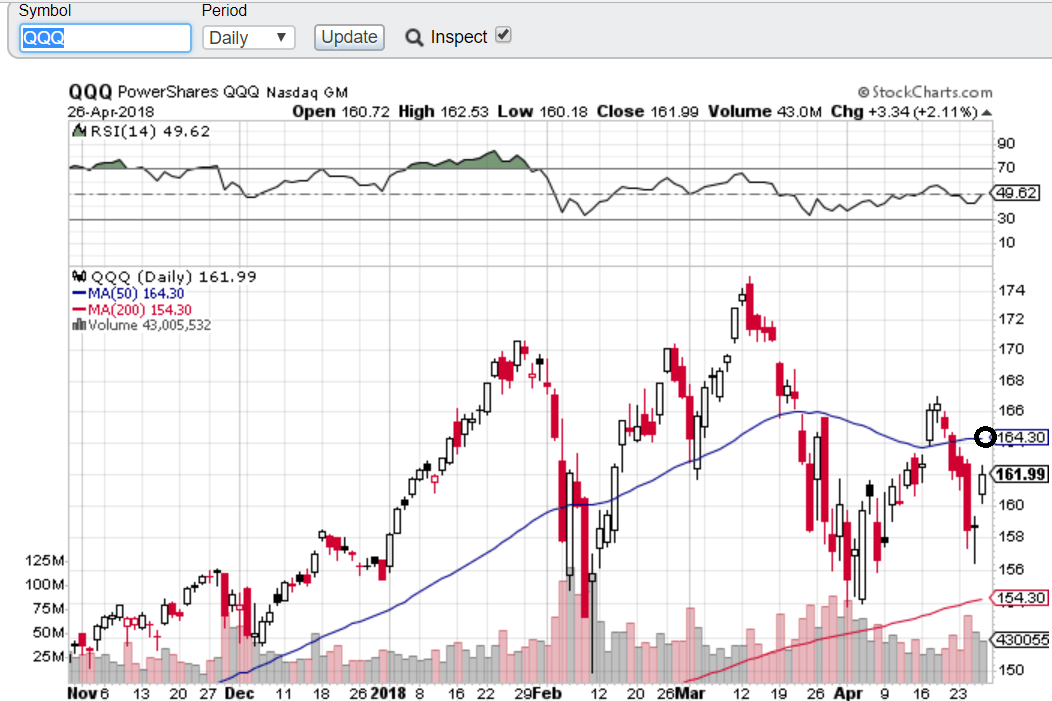 QQQ ran up past the 162 overhead resistance today, and then closed a penny below 162. However, QQQ closed after-hours at 164.20, which I circled in the chart above.

Have a great day!