Did you know that companies can choose what kind of earnings they want to report? I recently learned about this in my accounting class at BU. It’s called Earnings Management. Take Microsoft for example. The computers they sell might be returned, so they might decide to “delay” recognizing the revenue from these computers for the current quarter, and instead recognize them for a later quarter when they need to report better earnings. In other words, Microsoft is cleverly manipulating the unearned revenues.

How else do you think Microsoft exactly matched or beat analyst earnings estimates 41 out of 42 quarters? Here’s the source if you want to read more.

I will probably explore the idea of Earnings Management in my book. Hopefully I can get a good chunk of that done over this summer. 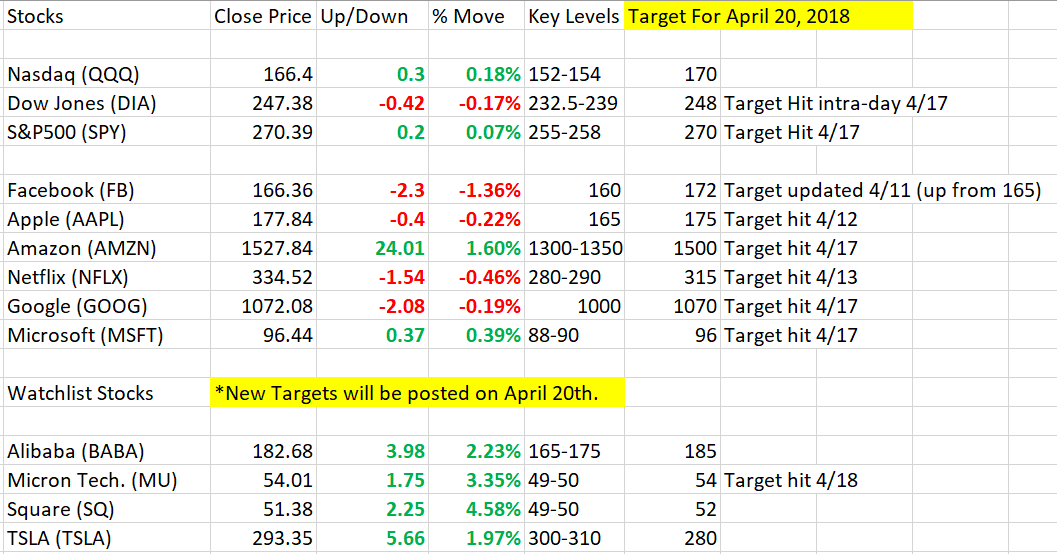 MU spiked up to my target of 54 despite being down quite a bit earlier in the day. Out of all of these targets that expire this Friday, I think QQQ and TSLA won’t hit their targets. Facebook probably won’t hit my new updated target either.

I am neutral on the current direction of stocks, but I’m still slightly bullish if I was forced to pick a side. I normally would have updated my targets, but I would like to see what happens by the close of this week.

If QQQ were to fall, I expect it to bounce off the 164 or 162 level. These are minor support levels so if something really bad happens, the index will slice through those levels like warm butter. Speaking of that analogy, cold butter is actually insanely hard to cut (at least for me), so that’s why I used warm butter for that analogy. Anyways, the first minor support level is about 1.5% down from current levels, and the next support level down is a drop of about 2.7%.

Also, like I mentioned in an earlier post, QQQ broke out of the $162 neckline of the inverse head and shoulders pattern, which has a textbook breakout move to about 167. This is where the index is currently having trouble. In fact, QQQ hit a high of exactly 167 today.

If QQQ were to dip to the 162-164 level, I would aggressively buy with a stop loss just below 162. Your target would be in the 169-171 range for the gap fill. This trade has an excellent risk to reward ratio.

In conclusion, I am still slightly bullish, but I would not be surprised to see the indexes shave off 2% or more by this Friday.

I hope to see you tomorrow!