Welcome back to the blog!

Stocks are still mostly grinding sideways or up slightly. Below is the weekly chart of SPY. 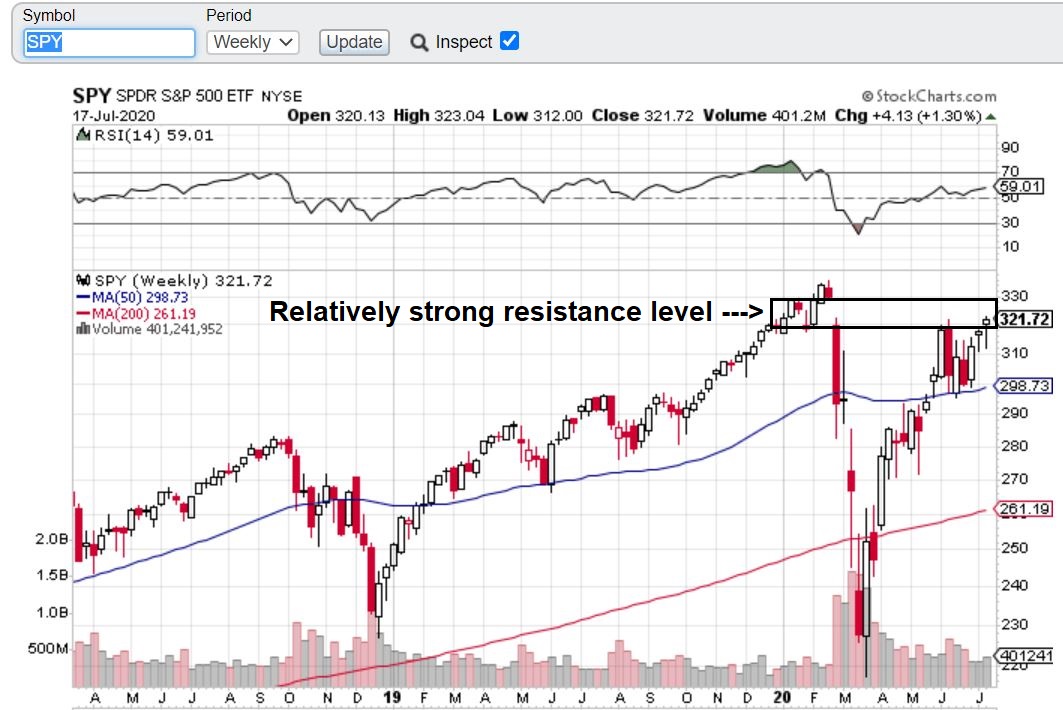 I don’t like prices up here for going long unless I was doing short weekly trades (less than 2 month holds). Over any longer time period (>2 months) and I think we are more likely to be lower than higher, we will see what happens. I’d want to be long near 300 and 275 for medium term swings (~3 month hold). Below I discuss some pullback trades I plan to go long on if SPY does pullback another 7% (to 300) and 15% (to 275).

I’m considering going long on Tesla, Netflix, Square, and/or Nio on any more sustained weakness for a short/medium term swing trade. For example, although I don’t like Tesla from a fundamental perspective at all, the trend is still up, and once they report earnings next week, it could present a nice “buy the dip” opportunity for a swing trade back up.

Same goes for Square, Nio and Netflix – although I think they are extremely expensive from most metrics, they present good short/medium term swing trading opportunities.

I plan to hedge my bets with a couple of shorts in the technology sector to reduce my overall sector risk when going long though. Below are the charts of Tesla, Netflix, Square, and Nio, and where I plan to enter. 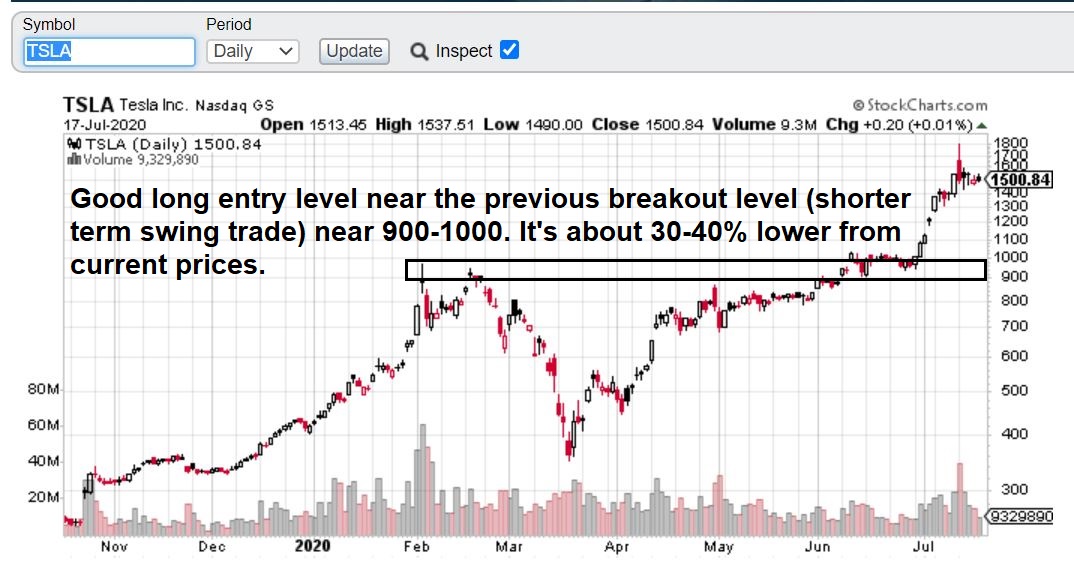 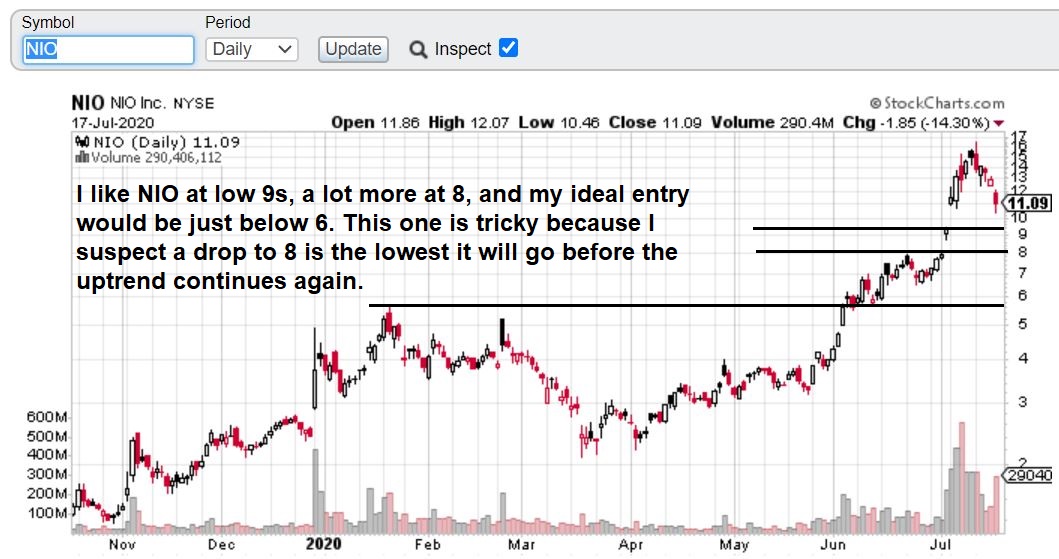 Enjoy the rest of the weekend, and see you next week (unless we get a large market sell-off and I swing long 🙂

During yesterday’s earnings call (5/2/2018), Elon Musk cut off the analyst that was asking him questions and said: “Excuse me. Next. Boring, bonehead questions are not cool. Next?”

Immediately after the next question, Elon Musk irritatingly replies: “We’re going to go to YouTube. Sorry. These questions are so dry. They’re killing me.”

I’ve circled each time the index has bounced off at or near the 235 level. If DIA closes below that level, we could see another 5-10% more downside.

Tomorrow, Alibaba (BABA) is reporting earnings at 6:30 AM eastern time before market open. Since there are low expectations going into earnings, I think there’s a good chance BABA will move upwards and test 190 tomorrow. Anything can happen though.

Did you know that companies can choose what kind of earnings they want to report? I recently learned about this in my accounting class at BU. It’s called Earnings Management. Take Microsoft for example. The computers they sell might be returned, so they might decide to “delay” recognizing the revenue from these computers for the current quarter, and instead recognize them for a later quarter when they need to report better earnings. In other words, Microsoft is cleverly manipulating the unearned revenues.

How else do you think Microsoft exactly matched or beat analyst earnings estimates 41 out of 42 quarters? Here’s the source if you want to read more.

I will probably explore the idea of Earnings Management in my book. Hopefully I can get a good chunk of that done over this summer.

MU spiked up to my target of 54 despite being down quite a bit earlier in the day. Out of all of these targets that expire this Friday, I think QQQ and TSLA won’t hit their targets. Facebook probably won’t hit my new updated target either.

I am neutral on the current direction of stocks, but I’m still slightly bullish if I was forced to pick a side. I normally would have updated my targets, but I would like to see what happens by the close of this week. 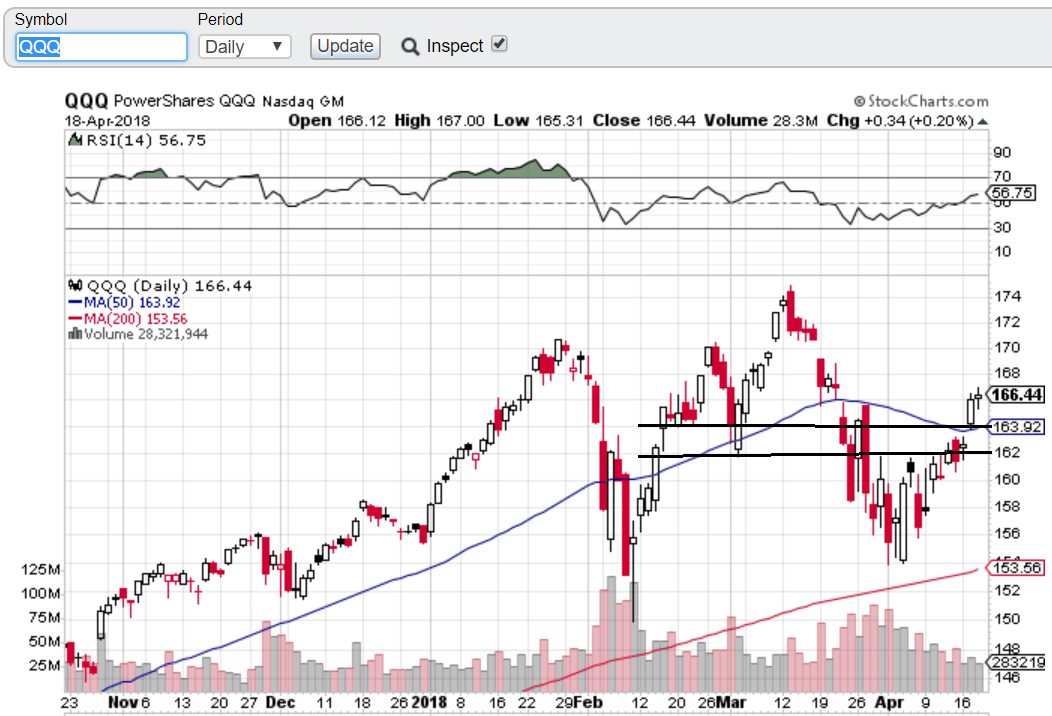 If QQQ were to fall, I expect it to bounce off the 164 or 162 level. These are minor support levels so if something really bad happens, the index will slice through those levels like warm butter. Speaking of that analogy, cold butter is actually insanely hard to cut (at least for me), so that’s why I used warm butter for that analogy. Anyways, the first minor support level is about 1.5% down from current levels, and the next support level down is a drop of about 2.7%.

Also, like I mentioned in an earlier post, QQQ broke out of the $162 neckline of the inverse head and shoulders pattern, which has a textbook breakout move to about 167. This is where the index is currently having trouble. In fact, QQQ hit a high of exactly 167 today.

If QQQ were to dip to the 162-164 level, I would aggressively buy with a stop loss just below 162. Your target would be in the 169-171 range for the gap fill. This trade has an excellent risk to reward ratio.

In conclusion, I am still slightly bullish, but I would not be surprised to see the indexes shave off 2% or more by this Friday.

I hope to see you tomorrow!

Did you know that Bill Ackman, the famous manager of the hedge fund “Pershing Square,” had a one billion dollar short position on Herbalife (HLF)? His reasoning for the massive short position was because he claimed Herbalife was running an illegal pyramid scheme. Thus, he mentioned that he would take his Herbalife short position “to the ends of the earth.” Unfortunately, he had lost so much money for his hedge fund that recently he announced that he no longer has a position in Herbalife. There’s a movie about his story regarding Herbalife called “Betting on Zero.” I found the movie quite entertaining.

I’ve modified my two week targets (for April 20th) down a little bit, but I’m now short term (2 weeks) bullish. I’ve also added Tesla (TSLA) to the watchlist because I think there’s a good chance it will resume the downward trend. Unfortunately there are no shares available to short (at least for me), but you could always buy puts.

Today we had another sell-off that accelerated into the afternoon. I had an intra-day update where I predicted that as long as QQQ held above 158, we would see a 160-161 close. Unfortunately, we blew down below 158 and closed well below that level at 156.63.

Although today’s leg down puts QQQ slightly below the weekly trend channel at 160, I’m still bullish for the next two weeks. I’m bullish because the current sentiment is extremely bearish, which means everyone already sold. If there’s no sellers left, the price can only move up. For the intermediate to longer term (1-3 months), I’m neutral or slightly bearish due to political uncertainty and mid term elections. Until the 200 day moving average starts curving downwards, I think the uptrend continues. I don’t think it makes much sense to short the indexes since they are near support levels and could see a big bounce.

Being too heavy on the long side also doesn’t make much sense with all the political uncertainty. The best approach would be to be net neutral or slightly long. This means you short sell stocks and go long on stocks such that your overall exposure to the market is approximately 0. Hence, even if the market goes down a lot, your short positions would realistically make you money while you would lose money on your long positions. If done properly, this net neutral strategy could maximize returns and reduce a lot of risk. 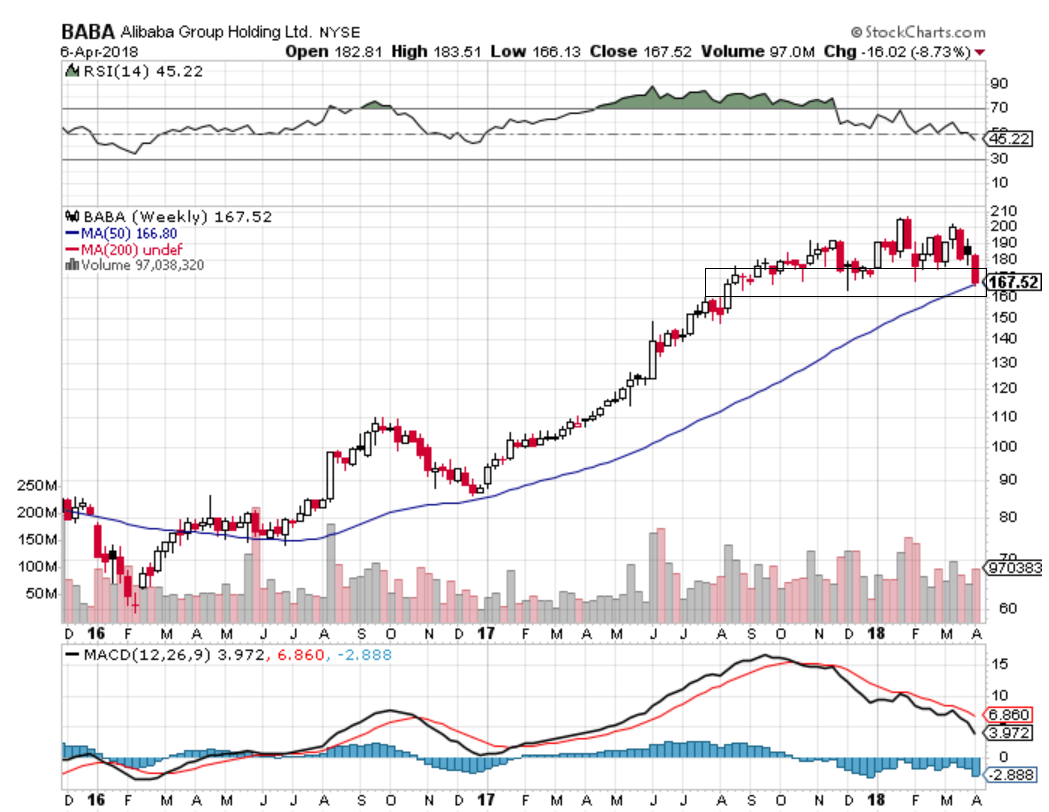 Above is the weekly chart of BABA. Notice how buyers get aggressive near this price level. The short term momentum is still down meaning you could wait for confirmation and then buy in. However, if you wait for a confirmation that buyers are present, you won’t have as good of a risk reward ratio. The entire market could have another sell-off next week due to more trade war issues as well as Russia retaliating against the Russian sanctions. This would almost certainly drag BABA down below the low 160s. 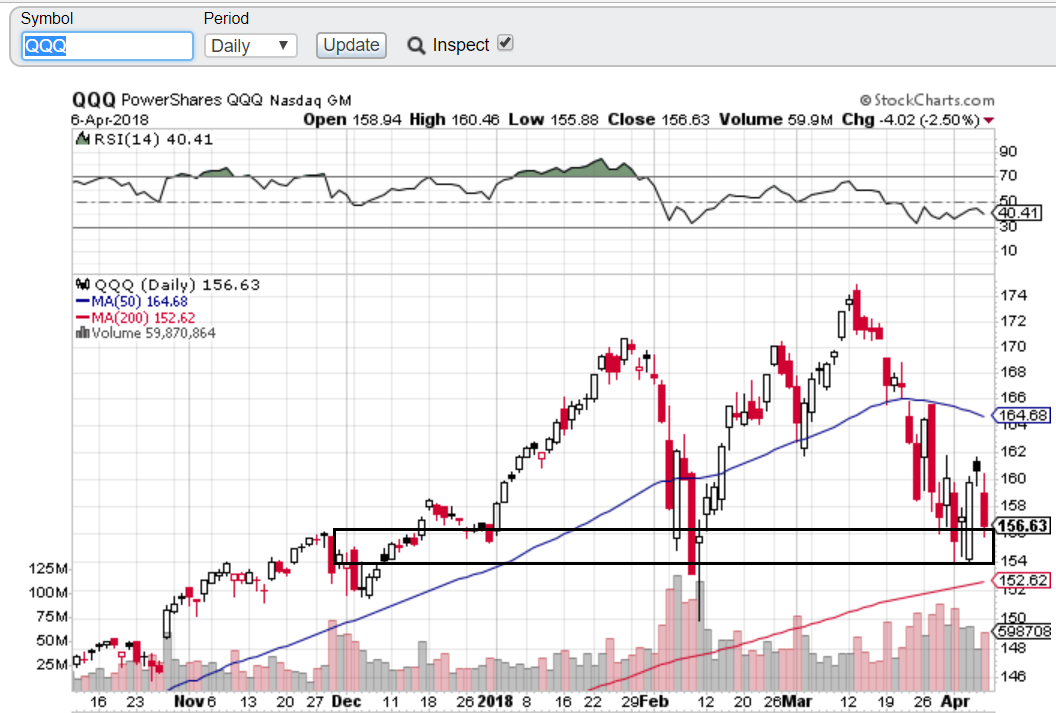 The daily chart of QQQ is above. I’ve drawn in a rectangle to show visually where buyers start stepping in. Although we could see another whipsaw like on February 9th (when QQQ hit 150 briefly), I think the index will hold the 154 level here.

One thing to note is that if AAPL falls below 165, I expect QQQ to also break below 154.

Good luck trading next week, and thanks for reading like always! 😀

I guess it’s true that TSLA stock moves as fast as its’ cars. 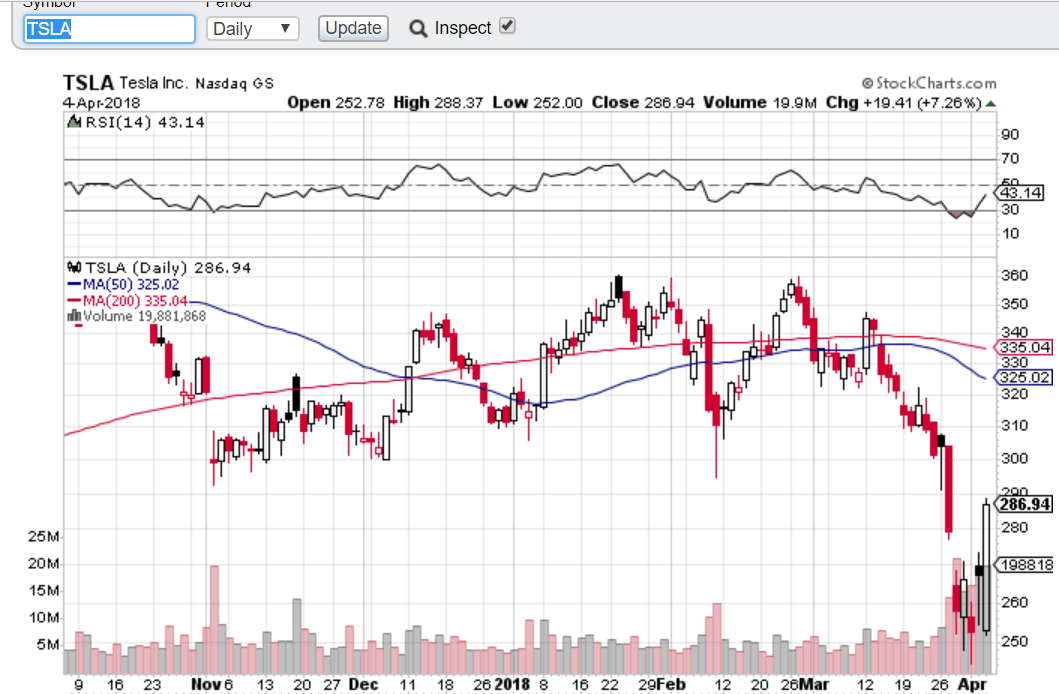 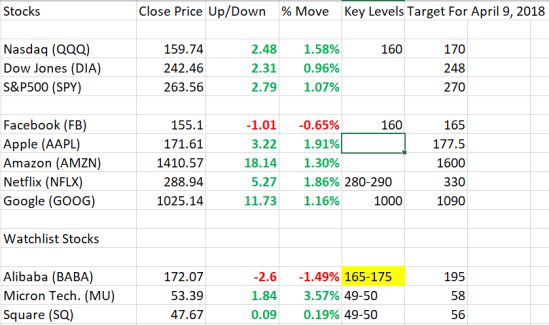 Update: If tomorrow we close green, I believe my April 9th targets will be hit by April 16th instead (one week later).

Today was a glorious day for me, and I’ve gained confidence as a trader. I didn’t sell into the morning gap down panic, and sticked to my trading plan. This morning, I asked myself, “Wait a minute, BABA is within the support zone of 165-175, and it is currently at 167.5 in premarket, why the heck am I not buying it?” And so, I closed my eyes and bought some shares at 167.5. I added some more at the start of after hours since I’m expecting a higher move tomorrow. 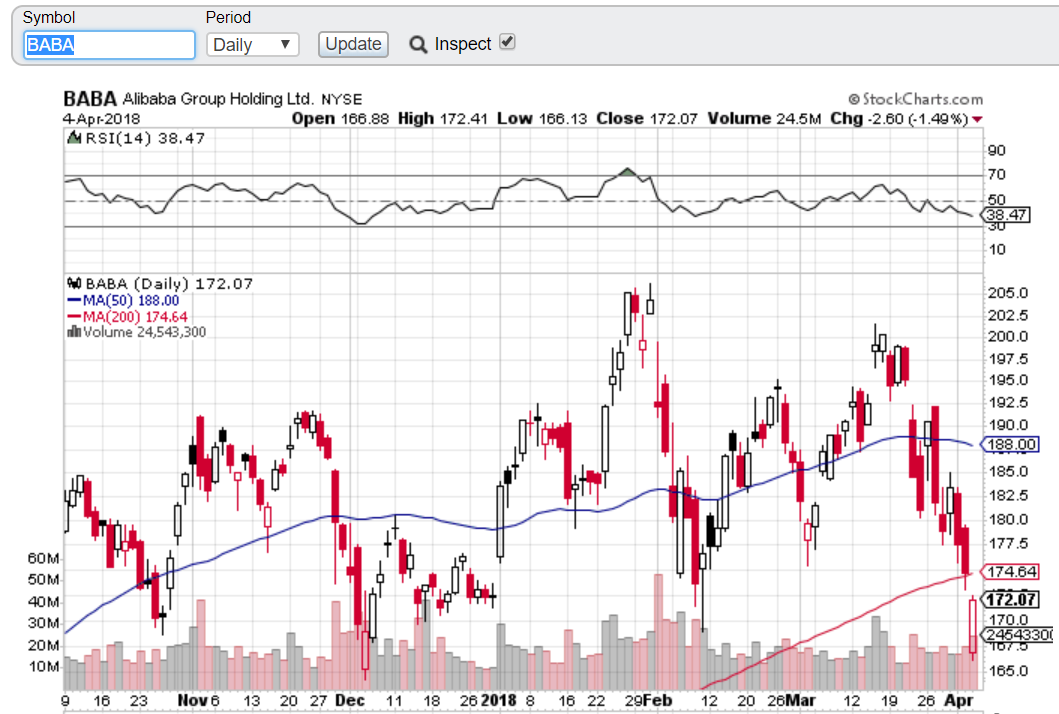 Lesson I learned today: The worst time to sell is when your emotions and entire body are begging you to sell.

Today the major indexes opened down about 2% due to trade war news escalating. Despite that, we ended up rallying hard and the major indexes closed up over 1%. Since we went up on bad news, I’m thinking we will close higher tomorrow.

QQQ is back at the 160 level which is the key weekly level to hold. Another up day tomorrow will confirm that we’ve got a short term bottom in place. A test of the 162-164 range tomorrow would not surprise me.

Take a look at the AAPL chart above. Notice how price bounced off the 165 level 5 times in the last two weeks. The rectangle I added shows the minor support level where buyers start getting aggressive. A close below the 165 level suggests a retest of the 150-155 zone. Since we are still above the support zone, I expect AAPL to retest the 175-177.5 level within two weeks.

MU has defended the 49-50 breakout level which is very bullish. The momentum has now shifted to the buy side. As long MU doesn’t close below the 49-50 support level, I think MU has a good chance to retest the 52 week high around the 60-64 level.

MU is down quite a bit in afterhours trading, but I don’t think this will sway the bulls tomorrow.